What are some of the most dangerous computer viruses?

10 Deadliest Computer Viruses of All Time 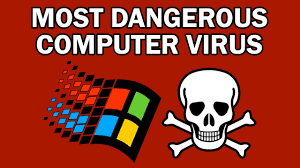 Many people have been infected with a computer virus in some form or another. To most people, it’s just a little annoyance that necessitates a clean-up and the installation of that antivirus application you’ve been meaning to get around to but never did.

In other circumstances, though, it may be a complete disaster, resulting in your computer becoming a very costly brick that no amount of antivirus will protect you from.

In this list, we’ll look at some of the deadliest and most well-known computer viruses that have wreaked havoc in real life. We’ve also included general malware like worms and trojan horses because they’re often mistaken for viruses. These viruses have cost billions of dollars in damages and have disrupted important real-world infrastructure.

The ten most well-known and dangerous computer viruses are listed here.

ILOVEYOU is regarded as one of the most dangerous computer viruses ever devised. It was able to wreak havoc on computer systems all across the world, causing roughly $10 billion in losses. It was estimated that 10% of the world’s computers were infected. The situation was so terrible that governments and huge organizations shut down their mailing system to avoid contamination.

Reonel Ramones and Onel de Guzman, two Filipino programmers, designed the virus. It used social engineering to get individuals to open the attachment, which was a love confession in this case. Because Windows at the time obscured the file’s true extension, the attachment was essentially a script masquerading as a TXT file.

When you click it, it will email itself to everyone on the user’s mailing list and overwrite files, rendering the machine unbootable. Because there were no laws against virus, the two were never prosecuted. As a result, the E-Commerce Law was enacted to address the issue.

Code Red was initially identified in 2001 by two eEye Digital Security personnel. It was given the moniker Code Red since the two were drinking Code Red Mountain Dew when they discovered it.

The worm preyed on machines using Microsoft’s IIS web server, taking advantage of a buffer overflow flaw in the system. It is able to run totally on memory, with a footprint of 3,569 bytes, leaving virtually minimal trace on the hard disc.

Once infected, it will generate a hundred copies of itself, but owing to a design flaw, it will replicate even more, using a large portion of the system’s resources.

It will then conduct a denial of service assault against a number of IP addresses, the most well-known of which being the attack on the White House website. Backdoor access to the server is also possible, allowing for remote access to the system.

The most memorable symptom is the statement “Hacked By Chinese!” that appears on infected web sites and has since become a meme. After a patch was published, it was estimated that $2 billion in productivity was lost. When you consider that there were 6 million IIS servers at the time, a total of 1-2 million servers were impacted.

David L. Smith invented it in 1999 and named it after an exotic dancer from Florida. It began with an infected Word document purporting to be a list of passwords for pornographic websites that was uploaded to the alt.sex usenet group. This piqued people’s interest, and when they downloaded and opened it, the macro within would activate and unleash its payload.

The virus will send itself to the top 50 persons in the user’s email address book, causing a surge in email traffic and interrupting government and corporate email networks. It also has a habit of corrupting papers by inserting a Simpsons allusion.

Smith was eventually caught when they traced the Word document to him. The file was uploaded using a stolen AOL account and with their help, law enforcement was able to arrest him less than a week since the outbreak began.

When the Word document was tracked back to Smith, he was apprehended. The material was posted using a stolen AOL account, and law enforcement was able to apprehend him with their assistance less than a week after the epidemic began.

He worked with the FBI to apprehend other virus producers, including the renowned Anna Kournikova virus maker. He spent only 20 months of his ten-year sentence and paid a fine of $5000 in exchange for his cooperation. The virus reportedly caused $80 million in damages.

Sven Jaschan, a computer science student who also built the Netsky worm, designed a Windows worm that was initially found in 2004. While the payload itself is irritating (it slows down and crashes the machine and makes it difficult to restore without turning off the power), the consequences were massive, with millions of computers infected and crucial infrastructure disrupted.

The worm used a buffer overflow vulnerability in the Local Security Authority Subsystem Service (LSASS), which manages local account security policies, to crash the machine. It will also use system resources to spread itself across the Internet and infect other PCs automatically.

The virus’s effects were widespread because, despite the fact that the exploit had already been fixed, many machines had not been updated. More than a million were infected, and vital infrastructures such as airlines, news organizations, public transit, hospitals, and public transportation were all affected. The total cost of the destruction was projected to be $18 billion. Jaschen was sentenced to a 21-month suspended sentence after being convicted as a child.

Zeus is a Trojan horse designed to infiltrate Windows systems and execute a variety of nefarious activities. Man-in-the-browser keylogging and form snatching are the most prevalent of these actions. Drive-by downloads or phishing schemes were used to infect the majority of machines.

It was first discovered in 2009 and has since infiltrated hundreds of FTP accounts and computers belonging to huge international organizations and banks, including Amazon, Oracle, Bank of America, Cisco, and others. The Zeus botnet’s operators exploited it to steal login credentials for social media, email, and banking accounts.

A total of $70 million was taken and held by the ring. In conjunction with the operation, 100 persons were detained. The developer of Zeus declared his retirement in late 2010, although many analysts feel this is fake.

Conficker, also known as Downup or Downadup, is a Windows worm created by an unknown creator that first appeared in 2008. The name is derived from the English word configure as well as a German derogatory term. It creates a botnet by infecting machines with weaknesses in the operating system.

The malware infected approximately 9 million computers throughout the world, posing a threat to governments, corporations, and individuals. It was one of the greatest recorded worm epidemics in history, generating an estimated $9 billion in damage.

The worm functions by taking advantage of an unpatched network service vulnerability in Windows. After infecting a computer, the worm will reset account lockout restrictions, limit access to Windows update and antivirus sites, disable specific services, and lock out user accounts, among other things.

Then it instals software that turns the machine into a botnet slave and scareware that tries to con the user out of money. Microsoft eventually issued a fix and patch, and several antivirus manufacturers updated their definitions as well.

Stuxnet, a virus believed to have been built by the Israeli Defense Forces in collaboration with the US government, is an example of a virus created for the aim of cyberwarfare, since it was designed to thwart Iran’s nuclear aspirations. Stuxnet is thought to have destroyed one-fifth of Iran’s nuclear centrifuges, with Iran accounting for approximately 60% of the infections.

It was propagated using infected USB devices and was targeted exclusively at Siemens products. It changed the machinery’s pace, causing it to disintegrate. If the infected machine didn’t have Siemens software, it would go dormant and only infect a few people to avoid being discovered. Siemens was able to get the virus out of its software in the end.

Mydoom was a Windows worm that first appeared in 2004 and quickly became one of the fastest-spreading email worms since ILOVEYOU. Because it has the text message “andy; I’m just doing my job, nothing personal, sorry,” it is assumed that the creator was paid to produce it.

Craig Schmugar, a McAfee employee who was one among the first to find it, gave it the name. ‘mydom’ was a line of text in the program’s code (my domain), and I added ‘doom’ since I knew it was going to be a long one.

The worm spreads by posing as an email transmission fault and attaching itself to the email. It will send itself to email addresses in a user’s address book and copy itself to any P2P program’s folder to disseminate itself via that network after it has been launched.

The payload is two-fold: first, it establishes a backdoor to allow remote access, and second, it conducts a denial-of-service assault against the SCO Group, which has been the subject of controversy. The worm was thought to have been engineered to cause havoc at SCO owing to a dispute over ownership of some Linux technology. The worm is still active in some form today, causing an estimated $38.5 billion in damages.

CryptoLocker is a kind of Trojan horse malware that targets Windows PCs. It spreads via a variety of channels, including email, and once infected, it encrypts particular files on the hard disc and any mounted storage attached to it using RSA public key encryption.

While removing the infection from the computer is simple, the files will remain encrypted. The only way to get the files back is to pay a ransom within a certain amount of time. If the deadline is not reached, the ransom will be dramatically increased or the decryption keys will be removed. Typically, the ransom is $400 in prepaid cash or bitcoin.

When law enforcement authorities and security firms gained control of a portion of the botnet that operated CryptoLocker and Zeus, the ransom operation was put to an end.

The ringleader, Evgeniy Bogachev, was charged, and the encryption keys were distributed to the affected machines. The number of infections is believed to be 500,000, with the number of individuals who paid the ransom at 1.3 percent, totaling $3 million, according to data acquired during the operation.

Though not as harmful as the other viruses on this list, it is one of the few Mac malware that have gained prominence for demonstrating that Macs are not immune. Intego, an antivirus business, initially found the Trojan in 2011 as a false Flash installation.

In its newest iteration, all that is required is that the user has Java installed (which is likely the majority of us). It spreads through infected websites that contain JavaScript code that downloads the payload. After being infected, the Mac joins a botnet of other infected Macs.

The good news is that if it becomes infected, it will only affect that user’s account. The terrible news is that over 600,000 Macs have been infected, including 274 Macs at Apple’s Cupertino headquarters.

Apple released an update to remove Flashback from people’s Macs, while Oracle produced a remedy for the exploit. As of 2014, it was still out in the wild, with an estimated 22,000 Macs infected.